Multiple factors have influenced the increasing of  Cerebral Palsy incidence in Brazil and worldwide.

Technological advances, for instance  have been helping more and more children with serious complications during their pregnancy and others during or after childbirth to survive. Another relevant factor is regarding maternity.
Throughout the time, planning the pregnancy provided women the power of choice. The gradual occupation of the space that once belonged only to men meant that motherhood was delayed, contributing to the design of advanced age (after 35 years old) and in many situations for the elder reproductive age, only made possible through the techniques of assisted reproduction,which show as a result, twin pregnancy in 45% of the cases and 7% in triplets or more, increasing the  pregnancy risk percentage, including prematurity. Nevertheless the worst complications of childbirth tends to affect girls younger than 15 years old. The teenage mother has higher mortality from complications during  pregnancy, childbirth and postpartum. The mortality rate is twice that among adult women. The incidence of newborns with low birth weight of teenage mothers is twice bigger than in children born from adult mothers, and neonatal death rate is three times higher. Among adolescents aged 17 years or less, 14% of births are premature. In 2000, according to Rachel Foresti, 689,000 deliveries were performed on adolescents in Brazil, the equivalent of 30% of all births in the country. Today there are over 700,000 births among teens per year, which has contributed to the rate of newborns affected by lesions of the central nervous system, once the conditions of prenatal and perinatal assistance is satisfactory only to a portion of the population.

Thus the prevalence of children with neurological disease in our environment is has shown to be quite high, requiring special attention from professionals in the rehabilitation  neuropediatric areas.
We know that there is no cure for Cerebral Palsy. Therefore new technologies and resources are being developed around the world seeking a better quality of life for these patients.

In individuals with Cerebral Palsy, alterations in postural tone can result from abnormalities in a variety of underlying systems, such as  abnormal mechanical properties of muscle, inability to organize and integrate somatosensory input from muscles of the neck (referred to as tonic neck reflex) so that moving the head changes the pattern of tone, inability to utilize visual and vestibular inputs, including labyrinthine and visual righting reflex for orientation in space, and excessive use of muscle in patterns of co-ativation as a postural strategy to maintain stability. In addition  these infants move primarily on the sagittal plane and subsequentaly develop stereotyped, limited secondary repertoires because of limited experience and limited sensory feedback. Because they do not expand their movement repertoires, they have difficulty activating and elongating all their muscles, consequently, they might never experience full ROM(range of motion) of their joints. If they do not develop full ROM and do not elongate their muscles fully, they are vulnerable to muscular contractures and skeletal deformities.


TheraTogs apply prolonged, low-load (gentle) forces to the musculoskeletal system to effect changes in muscle recruitment strategies, and, with full-time use, in muscle physiology and bone geometry.

To gain optimum posture and function, thousands or repetitions of movements must occur in optimum alignment. TheraTogs accomplishes this by wrapping the torso in a Velcro-sensitive garment that serves as a ‘strapping field,’ allowing the clinician to attach straps that work like external muscles to improve postural alignment and stability, and potentially address a wide variety of functional alignment and movement issues.

TheraTogs are highly adaptable and customizable by design; the list of product applications is long, and new ideas are added all the time. To help get you started, we know that patients  with Cerebral Palsy into the following issues have shown improvement with TheraTogs use:

Splints and Orthotics are common in the management of adults and children with neuropathology. The goal in using such devices is to improve hand function, facilitate balance in sitting, adjust biomechanical components for posture rider, or prevent the development of muscle contractures and structural deformities that affect functional skills. The therapist needs to evaluate the specific need for orthotic device and to determine its effectiveness with the same attention to functional goals as any other aspect of the plane of care.

The Kinesio Taping Method is a definitive rehabilitative taping technique that is designed to facilitate de body’s natural healing process while providing support and stability to muscle and joints without restricting de body’s range of motion as well as providing extended soft tissue manipulation to prolong the benefits of manual therapy administered within the clinical setting.
It is usual be used in the therapeutic riding as a support and stability to muscle and joints as showed in the pictures above. 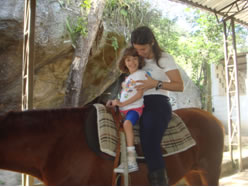 Theratog assistants in the biomechanical organization during a mount. 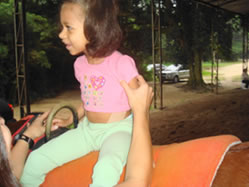 Kinesiotape from pelvis to thorax to reduce oblique abdominals. 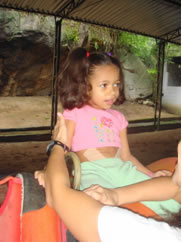 This study shows that the  integration of complementary therapeutic resources during Therapeutic Riding contributed significantly in achieving the neuromotor goals to all patients suffering from Cerebral Palsy.