Teaching Children with Autism to Mind-Read through Therapeutic Riding

Autism is a complex disorder that affects many aspects of a child’s functioning.

Social and communicative development are particularly disrupted, even in individuals who are of non-verbal intelligence, and these difficulties are exacerbated by rigid behavior patters, obsessional and routines. Although the ´enigma’ of autism has inspired an enormous amount of research the causes of condition remain poorly understood. Ritvo (1976)  was the first author to consider the autistic syndrome as a disease of the central nervous system as well as one of the first to come up with the importance of cognitive deficits in autism. However Cognitive Theory for autism has been proposed  in studies by Frith and Baron-Cohen and Col. (1985). These studies showed that autistic children, even those classified as high functioning, are unable to attribute intentional states to others. Recent studies of young, normal children have stressed the importance of the development of  the “theory of mind” and it is around this area that is suggested this study.

The Theory of mind is an interesting  expression used to describe the ability to infer other people’s mental state ( their thoughts, beliefs, desires, intentions, etc), and the ability to use this information to interpret what they say, make sense of their behavior and predict what they will do next. Using a false belief task, for instance if the child knows the money is in the old china vase but Burglar Bill thinks it is in the desk drawer; when asked where Burglar Bill would look for the money the child should judge that he will look in the  wrong place-the desk drawer. Wimmer and Perner showed that children of around 4 years old were able to pass such a test.
On tests of false belief comprehension, children with autism make more erros than both normal and learning disable children of a younger mental age. In addition children with Down syndrome had a performance as good as normal children, in the same four- year-old age rate. This discovery of a specific difficulty in autism attributed mental states, has been shown in many studies. The theory that people with autism are harmed in the process called- mindblindness- may explain the distinction between what people with autism can do and can not do in a laboratory situation compared with others.  Baron-Cohen (1991) pointed out that for most of people mind reading comes as naturally as walking or chewing. They consequently deduce what other people know and what they don’t, and they understand implicitly that thoughts and feelings are revealed in gestures, facial expressions and tone of voice. An autistic person may sense none of this.

In this article, we report the results in Theory of Mind process with autistic children, aged between 4 and 10 years, with a language age of at least a 5 year old level. The experimental study was based in the Read-Mind program created by Simon Baron-Cohen at Cambridge University and London University being developed in the Therapeutic Riding Centre -EquoAmigos.
The program aims to enhance the comprehension about mental state concepts and the skills associated  with understanding other’s mind. 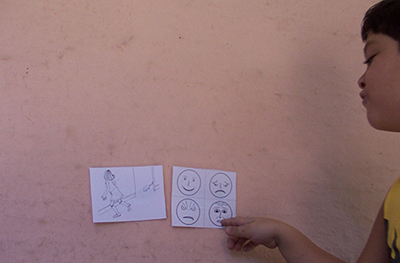 The periodicity was once a week during four months
Was established a baseline (i.e. to determine the level at which teaching should commence)
The materials was used at each stage according to the patient`s response
The teaching procedures to be followed

We were surprised to find that significant changes occurred in the specific areas selected after only a relatively brief training period, and that these improvements were maintained long after intervention ceased

What makes a good therapy horse?

Therapeutic Horseback Riding is a multidisciplinary approach which has become known worldwide in recent decades. The horse is an incredible animal that serves a multifaceted and dynamic role in therapeutic horseback riding, enhancing the quality of life of many people with different disabilities and needs.

Equoamigos | Teaching Children with Autism to Mind-Read through Therapeutic Riding

Autism is a complex disorder that affects many aspects of a child’s functioning. Social and communicative development are particularly disrupted, even in individuals who are of non-verbal intelligence, and these difficulties are exacerbated by rigid behavior patters, obsessional and routines.